Welcome visitor you can login or create an account.

Atoms, and Electrons in Orbit

You know what an atom looks like, right? Let me clarify, you know what they tell you an atom looks like. It is like the solar system. There is a nucleus in the middle (like the sun). Then we have electrons circling the nucleus, like planets circling the sun. It is the same thing except bigger. We are shooting energy x-rays. We are shooting energy into the material and it is kicking one of the inner shell electrons out of orbit, like knocking Mercury out of orbit. Nature says, "No, no, there is supposed to be something there," so it takes an electron from a higher orbit and makes it drop down into the lower orbit. Then everybody (the remaining electrons) sort of moves forward in line, this is called cascading electrons. In order for an electron to change orbit, like for a spaceship to change orbit or a moon to change orbit, it has to give off some energy because it is at the wrong energy state.

This is what makes it fire like a retro rocket and then changes orbit. When it fires like a retro rocket, the energy it gives off is called two things: a fluoresced x-ray, hence x-ray fluorescence, and more importantly, it is also called a characteristic x-ray. For example, a particular electron on a lead (Pb) atom, gives off a certain energy frequency and nothing else gives off that same frequency. So, if I have a detector that can detect that frequency, it can determine, "That is an L-shell lead atom, or it is from chrome.” That is what a detector is doing, and that is the magic. It is taking the energy given off by electrons when they change orbit, measuring it, counting and doing some fancy math, then coming up with results that say, "It is 10% this and 5% that.” 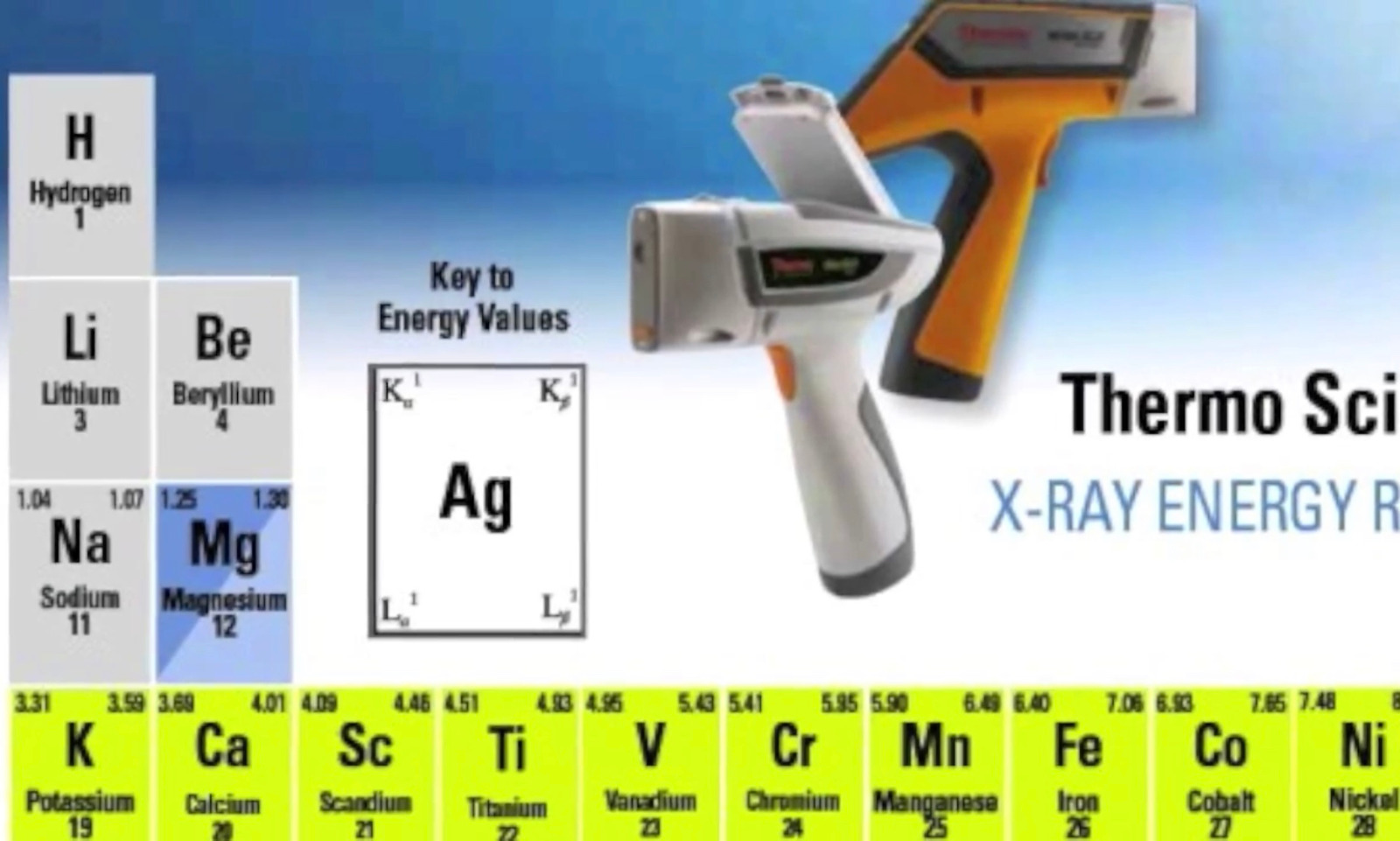 Okay, so we are referencing the periodic table. The square that is printed AG, the four corners state K-alpha, K-beta, L-alpha, and L-beta, those are four different electron orbits. If you look at any one of those squares, you will see some numbers next to each of those four corners. This is telling you the frequency or the energy state each one of those atom's electrons has.

Look at PB lead, 10.55 in the bottom left corner and 12.61 in the bottom right. This is the energy we are utilizing to retrieve measurements. So when we are shooting energy in, we are also getting energy back out. That energy hits our detector, which is inside the snoot of the analyzer. Then all the math happens and the magic.

RoHS says PB lead has a limit of a thousand parts per million. If you are using XRF technology, it uses a 30% factor. The detector will state pass or fail when the results are returned. For example, it is a thousand parts per million, but 1300 and 700 or 30% either way. Basically, if your number falls between those two, it gives you an inconclusive answer. If it is above 1300, it is a definite fail. If it is below 700, it is a definite pass. If it is between the two, it says it is inconclusive. Once I have input some information, I can start the detector. 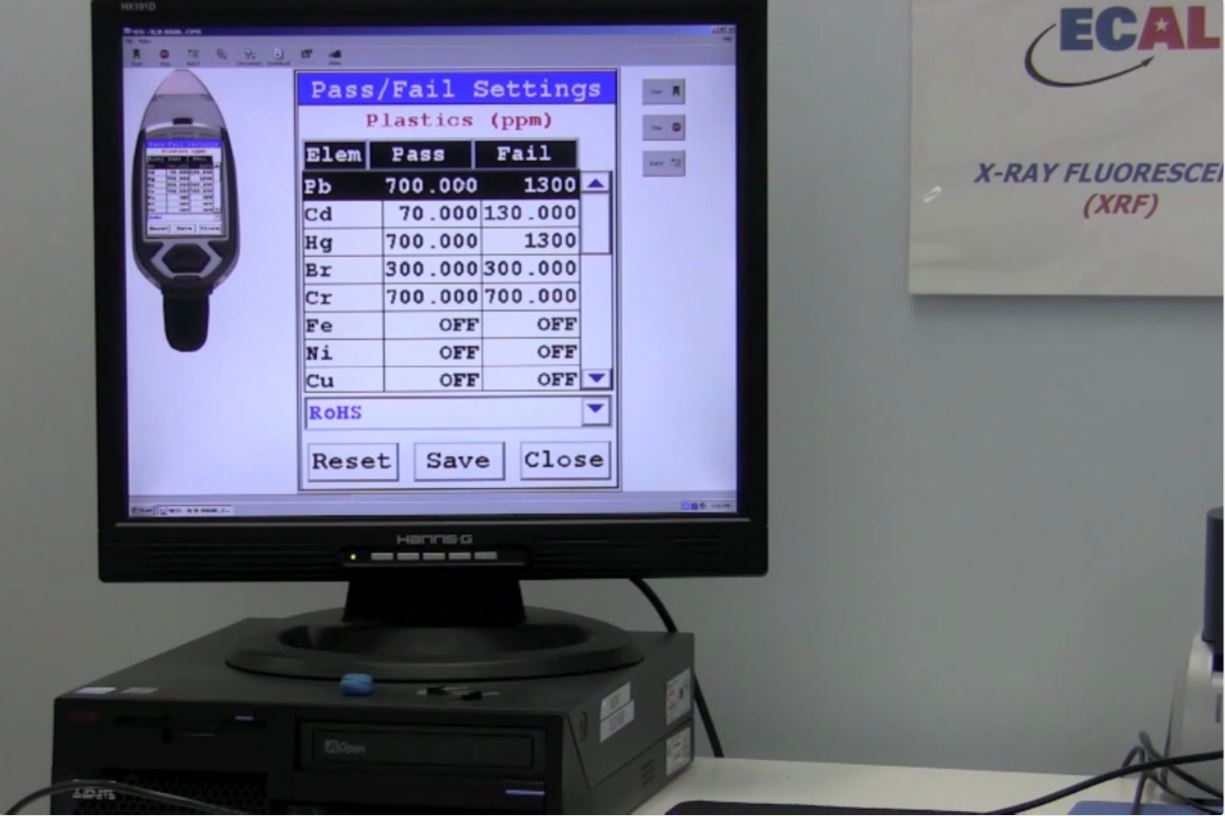 After going past the minimum time, it failed right away. One of the interesting things about this is if it fails, it can fail in two seconds. If it is going to pass, it has to have at least gone 30 seconds. If we look at the screen, the standard that comes with this says PB lead is 155 parts per million plus or minus 12. We measured 154 and that is pretty good. Cadmium, we are a little off on. Chrome, 103 versus 143, plus or minus 63. Mercury, 106 plus or minus 10, so we are right in there. This is saying our machine is operating within compliance.

USBid, Inc. sells PC Board level electronic components to thousands of customers worldwide. Our part directory contains SKUs of inventory from OEMs and Distributors around the globe, providing the resources to meet all your sourcing needs.